The original trailer for the film:

‘I think someone should just take this city and just… just flush it down the fuckin’ toilet.’

In this film everybody is a hustler. The cabbies for hire, the pimps and prostitutes, the gun dealer, the campaign staff selling the politician to the people, the politician in turn selling a palliative to the cynical post-Vietnam, post-Watergate America. The merchant mentality of late capitalism has become the social currency for a morally bankrupt America. Traditional values of heroism, loyalty and courage are co-opted by a plutocracy to protect financial interests abroad.

The hyper-individualism of liberal democratic ideology has resulted in a crisis of identity. The jaded urban citizen in the air-conditioned gulag of wage-slavery and channel surfing serfdom exists solely as an atomised object in thrall to the manipulations of advertisers and the fluctuations of the market. The individual has been liberated  only to be an isolated fragment in the urban ‘jungle’ of competing self-interest. Economic value has usurped moral and spiritual value in the liberal system and creates the nihilism and cynicism so prevalent in the film.

Liberalism has two poles of thought: economics and ethics. They correspond to individual and humanity. The ethics of course is purely social, materialistic; if older ethics are retained their metaphysical foundation is forgotten, and it is promulgated as as a social, and not a religious, imperative. Ethics are utilised to maintain the order needed as a framework for economic activity. Within that framework however ‘the individual’ must be ‘free’… it is therefore quite permissible for such an individual to raise himself above the weakened public authority, and to dominate, by private means, the inmost thoughts of whole populations by his control of the press, radio and cinema  (Francis Parker Yockey: Imperium)

According to Paul Schrader his original script contained a strong ‘racist’ element which was largely removed for reasons of ‘social responsibility’. Nevertheless the imprint of this original ingredient in the social dislocation of Travis remains on the film. The racial tensions which exacerbate the isolation of Travis are visible in the landscape strewn with garbage and human wreckage, steam rising from the grills, sirens screaming, hostile and deranged blacks crossing his path on streets as dangerous in some places as any Vietnam war zone, as alluded to by one the drivers: ‘fucking mau mau land’. The audience, like Travis, is set adrift amid the glittering stream of traffic and neon-lit porno theatres, casual sex and casual violence, a place where civic virtues are disintegrating, along with any shared value system and community, and differing ethnic groups with nothing in common beyond the base desires for money and sex are competing for power. 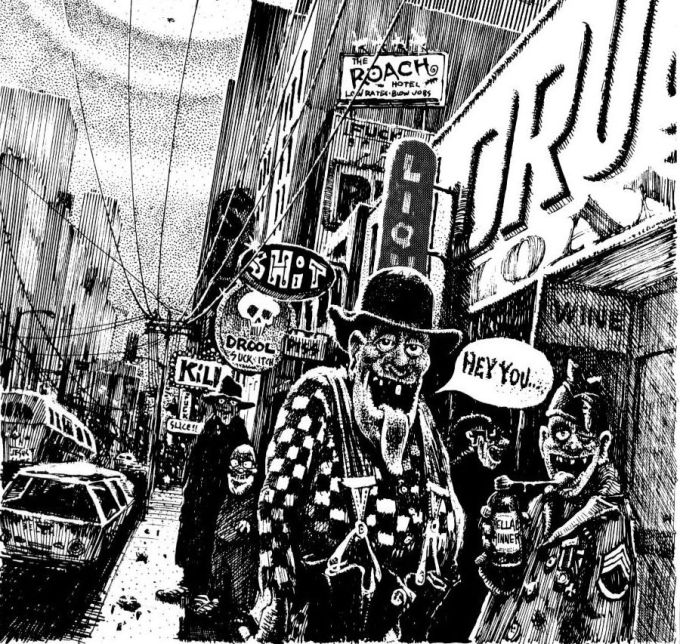 All the animals come out at night – whores, skunk pussies, buggers, queens, fairies, dopers, junkies, sick, venal. Someday a real rain will come and wash all this scum off the streets.

Travis is not that far removed from the ‘scum’ he excoriates and his consciousness of this is sharpened by his encounter with Betsy:

‘I first saw her at Palantine Campaign headquarters at 63rd and Broadway. She was wearing a white dress. She appeared like an angel. Out of this filthy mess, she is alone. They… cannot… touch… her.

There is significance in his choice of movie for their first date. The film is an example of the Masters and Johnson/Kinsey Institute sanctioning under the aegis of scientific research the introduction of transgressive imagery and ideas into society:

Kinsey proved to be the role model of a whole generation of subverters of sexual morality, including Masters and Johnson and Hugh Hefner, who mentioned Kinsey as the inspiration behind the founding of Playboy. Since only the sexually liberated would talk to him, Kinsey’s report proved to be an expression of the hip-ghetto alliance in one of its purest forms. When Kinsey tried to portray these results as an expression of what everyone did, the sexually liberated culture-brokers accepted it with an avidity that bespoke a guilty conscience. (Libido Dominandi – Sexual          Liberation and Political Control: E Michael Jones)

The ‘hip-ghetto alliance’ functions as the buffer zone between the plutocracy and the underclass, the bohemian counter-cultural space between extreme wealth and extreme poverty. The whole cultural space of this period is the aftermath of the dream of the hipsters and Beatniks to revive the dead culture by embracing ‘spade kicks’, the liberation from social and moral responsibility now turning sour:

I walked with every muscle aching among the lights of 27th and Weston in the Denver coloured section wishing I were a Negro, feeling that the best the white world had offered was not enough ecstasy for me, not enough life, joy, kicks, darkness , music, not enough night ( Kerouac – On The Road)

The seventies produced a crop of films marked by extremes of sex and violence (Straw Dogs, Clockwork Orange, Death Wish, etc ). This was the explosion and exposure of the underbelly of liberalism, testaments to the havoc created by the attempt to substitute illicit sex and drugs and hyper-individualism for the numinous quality and community inherent in the previous metaphysics and social structures of Western civilisation.

It is in the interest of the ruling class to promote sexual liberation as a way of consolidating its power. The people who engage in this type of behaviour are besotted and stultified and unable to object to any violation of the moral law because they themselves are unindicted co-conspirators in the same scheme.  (Libido Dominandi – Sexual Liberation and Political Control E Michael Jones) #

The decay and the residual moral resistance is visible in the case of Iris, the child prostitute. She too is a dupe of the progressive notion of free love and easy money, lured by the bright lights of the big city from a run down town in Pittsburgh, an example of the closed down manufacturing communities considered no longer economically viable and therefore left to decay.

Just as liberalism proffers the illusion of universal brotherhood to sanction its economic imperialism abroad, its adjunct entertainment industry manufactures the shadow world where illusion reigns supreme; a phantasmal environment where the colonised mind of the populace, saturated with movie mythology, is encouraged to indulge in the necrophilia of manipulated imagery. The sordid base of the shadow world is the porno business, where star-struck teenagers like Iris are delivered over to the brokers and dealers in human flesh. The whole filthy business is symbolised by the scrunched up twenty dollar bill thrown to Travis by Iris’s pimp which he regards as piece of paper crawling with germs, contaminated by the immoral activity it enables.

The conflict between the lies pimped out to the public by the media is reflected in the scene of Travis watching TV with a gun in his hand while balancing the TV precariously on its stand. With the tilt over the edge we have a symbol of no return and destruction but also a separation from the manufactured image and the rise of an alternative self-image.

From this degraded culture he will fabricate an image of heroism in an attempt to salvage a scrap of decency from the engulfing tide of degeneracy, to create a purpose and a direction for himself. The cowboy boots and the native indian mohican haircut (a hairstyle adopted by some troops in Vietnam before battle) evoke the movie mythology of the Western. But this same degraded culture that would denounce him as a pariah if he had succeeded in assassinating a pimp of the plutocracy  will proclaim him as a folk hero when he slays the pimps of the underclass.

The most suggestive glimpse into this repellent reality (this mirror play of corruption and collusion) is offered by the encounter, right after his rejection by Betsy, with a passenger who hires a cab in order to confess his intention to murder someone. The passenger is played by the director of the film Martin Scorsese. He ‘directs’ De Niro’s character to keep the meter running, to stop writing, to just sit, and then directs his gaze to a window in an apartment. The anonymity afforded by city life allows this cab to function as a secular confessional booth, invoking vestigial remnants of Catholicism,  but also bringing to the foreground the ambiguous nature of film in and of itself. Is this the psychological implantation of an idea into the mind of Travis/De Niro/the audience? Or is it a form of mind-reading, teasing out the ‘bad ideas’ already developing in the back of the mind? Is it temptation or communion? Is Scorsese confessing his sins to the public in the dark of a movie theatre, snickering like a guilty child, and asking us for absolution?

Scorsese attempts to inject reality into the movies and to challenge the conventions of American cinematography and scriptwriting. The use of transgressive imagery and shocking ideas and language to articulate a cry from the suffering underbelly of liberalism is undoubtedly powerful, but the film itself has become ‘iconic’, a part of celluloid myth, ranked among the greatest films. This in itself is problematic. Just as Travis became a hero because he failed in his primary aim of assassination his desire to invoke ‘true force, all the kings men cannot put it back together again’ so too Scorsese could be said to have taken aim at the system (understood here as the ideological domination of Liberal Democracy) and somehow, despite all his rage and nihilistic vision, ended up playing his part in perpetuating the commodification of reality, the ‘glamorization’ (in the arcane sense of bewitchment) of violence and suffering, the sacrifice of the real to the Moloch of the imaginary. 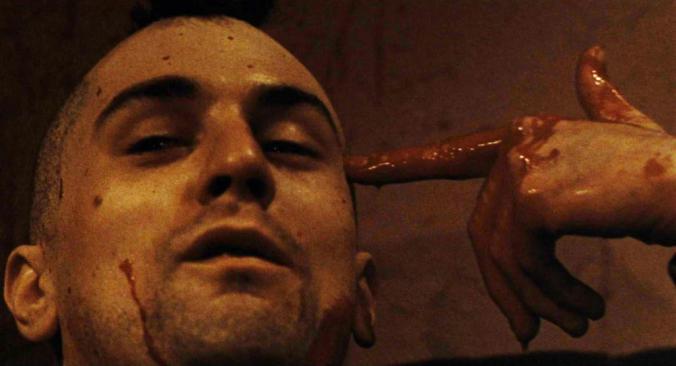